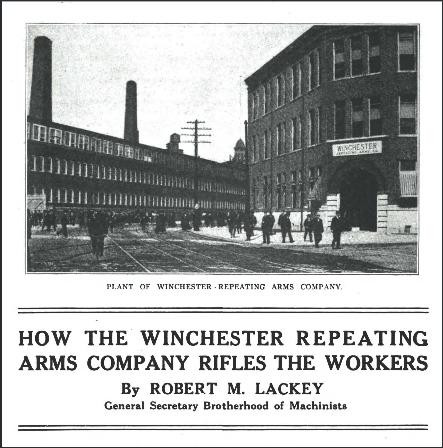 In his article, Lackey highlighted the means by which the company’s owners and stockholders attained their wealth, and contrasted the opulence they enjoyed with the conditions to which they subjected their workers:

“The Winchester Repeating Arms Company is the largest manufacturer of firearms and ammunition in the world. Its plant covers 59 acres the heart of New Haven…From 5,900 to 6,400 workers are on the payroll…Its products are shipped to every corner of the globe. Winchester goods are in great demand for sporting purposes, but wars are a very important source of revenue. Frequently, mysterious shipments are made to unknown destinations. They may be for a revolution in China, South America, or Mexico.

“[The company] is interesting because of the tremendous dividends paid the stockholders [and] the poor pay, long hours and tyrannical treatment given the employees…Ten hours constitute a day’s work. Overtime is paid for as straight time. A worker who is two minutes late is docked 1 3/10th hours on the week’s pay…Every employee is watched like a prisoner and quickly fired if suspected of the least leaning toward unionism. The piece-work system has probably been carried out to a greater extreme than in any other American factory…Truckers are paid by the weight of their load; sweepers by the square foot; and the men who gather the cuspidors and clean the windows are paid by the piece. Frequent cuts are made but never all over the factory at one time. The company is too wise for that. A reduction is made in one department at a time but every department is due for about one cut in every two years.”

“Organizers from the Industrial Workers of the World (IWW or Wobblies) were in New Haven in 1912, just months after their celebrated ‘Bread and Roses’ strike victory in Lawrence, Massachusetts. [They] went public by distributing thousands of copies of the IWW’s Machinist Bulletin to workers at the Winchester Repeating Arms Company.”

--Steve Thornton, A Shoeleather History of the Wobblies: Stories of the Industrial Workers of the World in Connecticut, 2014 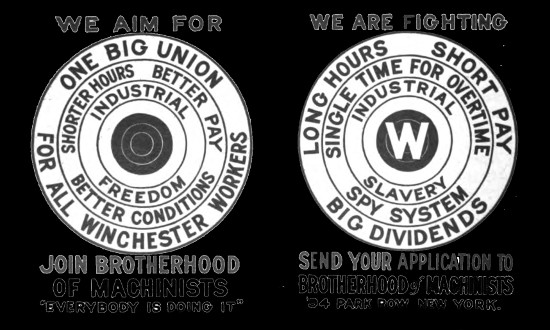