Waxing and Waning: World War I and its aftermath at Winchester 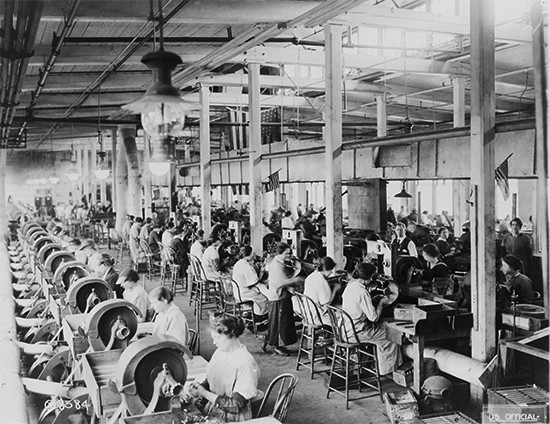 Before United States entry into World War I, Winchester was a major producer of the .303 Patten 1914 Enfield for the British government. After the U.S. joined the “war to end all wars,” it supplied the U.S. government with the similar 30-06 M1917 rifle, and during the war proceeded to develop the Browning automatic rifle and the Browning .50 caliber machine gun.

Winchester greatly expanded its operations during the war, an expansion that did not prove to be sustainable.

“The company had borrowed heavily to finance its massive expansion. With the return of peace the company attempted to use its surplus production capacity, and pay down its debt, by trying to

become a general manufacturer of consumer goods: everything from kitchen knives to refrigerators, all to be marketed through ‘Winchester Stores.’ The strategy was a failure, and the Great Depression put the final nail in the company’s coffin. Winchester Repeating Arms Company went into receivership in 1931, and was bought at bankruptcy auction by the Olin family’s Western Cartridge Company on December 22 of that year. Oliver Winchester’s firm would maintain a nominal existence until 1935, when Western Cartridge merged with its subsidiary to form Winchester-Western Company; in 1944 the firearms and ammunition operations would be organized as the Winchester-Western Division of Olin Industries.