Our Community at Winchester Confronts the Cold War 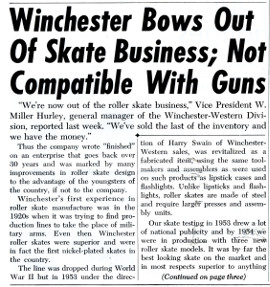 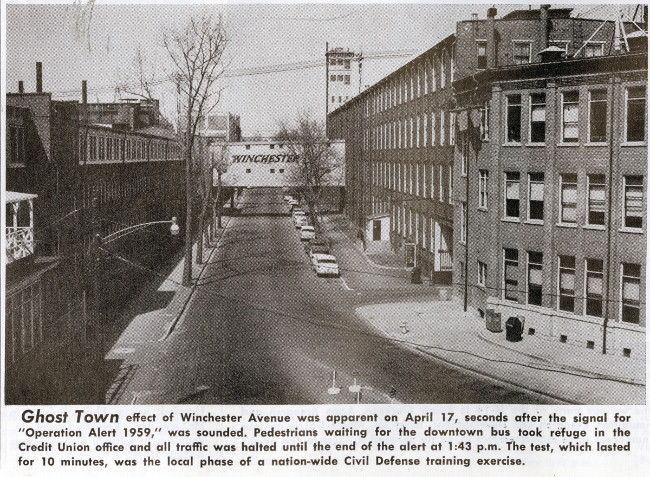 Of the 10 workers queried on this question by the Winchester News, August 15, 1958, most seemed to feel that “”beating communism” and “defeating Russia” were synonymous with achieving ‘world peace.’

Sal Capasso of the Casting Shop thought ‘Chances are pretty good’ because ‘we’ve called [the Russians’] bluff by sending troops to the Middle East.’

Robert Stackpole, Gun Assembly: ‘The way the President has sent troops overseas is helping world peace. We’re calling Russia’s bluff…Peace is being made right how by these different actions.’

Nevertheless, Capasso, Vince Criscuolo from the Mill Stockroom and Leonard Cables from the Barrel Shop also expressed confidence in the work of the United Nations.

Capasso: ‘The U.N. and Hammarskjold [Dag Hammarskjold, then President of the United Nations General Assembly] have been doing a pretty good job of finding out what the trouble is and trying to do something about it. I think the coming generation will see peace.’

Criscuolo: ‘I have confidence in the U.N. Everyone has something to lose—if one gets hurt, they all do. In the long run, we’ll beat communism. We can take it by the numbers. ‘

Cables: ‘I think they can work something out through the U.N. and get together, as in the summit meeting.’

Others were cautious or pessimistic, still viewing Russia and/ or communism as the obstacles to world peace.

Fedora Surato, Model 50: ‘Russia seems to disagree a lot, but we can overcome communism and work something out if they are really sincere about wanting peace.’

Eddie Estes from the Garage: ‘I think everybody’s very selfish; like Russia—they want to take over the better parts of the earth. I don’t see any peace in sight.’

Some evoked religious faith as a means of ‘defeating communism.’

Henry Parker of the Battery Shop: ‘All of the nations can meet together and work things out by discussing it. I think we can overcome communism. We have to take care of our allies and pray a little harder. That’s important.’

Mary Gosch, 24-D Arms: ‘Until people learn to live together, I don’t think there will be any peace. Our only hope is that our President will work for us. We’re strong enough to beat communism by our religious faith alone. People of today have a lot of religious education.’

Thomas Morsicato, of the Sheet Metal Shop, felt that peace was possible, but sadly, not at hand: ‘It could happen if all the nations got together and tried to get along with one another. As long as we and the allied countries keep strong and keep our standard of living, we can keep communism away from here. But the way things are, peace is far away.’

Only Francis Quinn from the Receiver Shop mentioned the unprecedented weapon of mass destruction used by the United States in 1945 as a new factor, and he didn’t appear hopeful that any lesson had been learned: ‘One country is just as afraid of war as another. They know what the situation with the atomic bomb is. They should do away with all the armies, but that will never work out. If people want a war, they’re going to have one.’