“On the last day, we all gathered around the statue of John Wayne. I had polished him up real good before that. I was the only one who cleaned up John Wayne.” 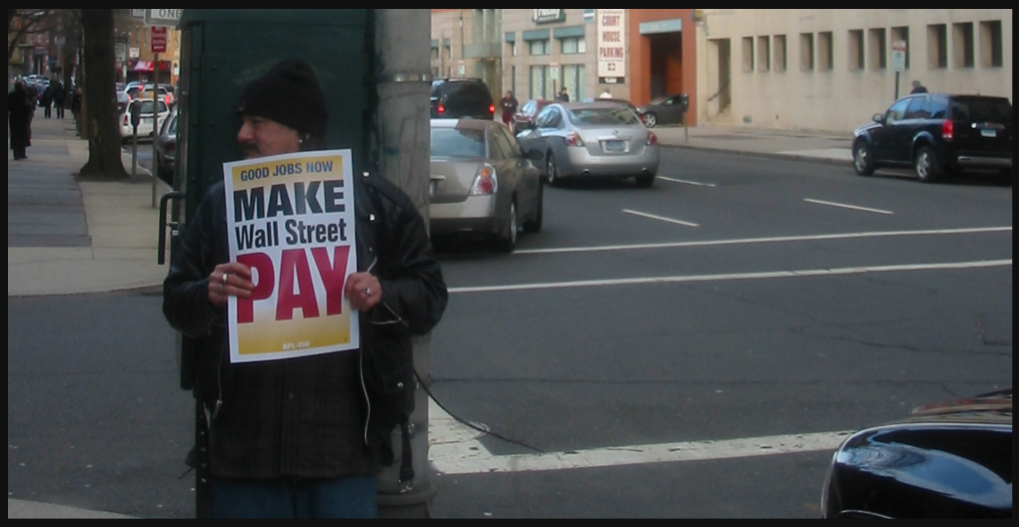 Roy worked at Winchester from 1985 until it closed in 2006. He was hired because he “was working installing burglar alarms and going to school at night for electronics, tutoring a guy [on layoff from Winchester] whose father was a boss there.” When his friend was called back, “I applied there and within a week I was working there. I used to be lucky getting jobs that way.”

When he got laid off, Roy bid on another Winchester job, working on a “torturous hot machine” that made metal slugs and hammered them into shotgun barrels. It was work “no one wanted, so I figured...I’d never get laid off” again. It was “nice, though” because there were two shifts, each twelve-hours long, and I “never had time to go to the bank.”

Next, he became a maintenance worker, a position he also liked, for a different reason: “In maintenance I was allowed to go out on my own and to work on the job as I saw fit...and make things safe. I liked fixing things and I liked making things better...A lot of people wanted to do a good job but their machines wouldn’t work and they didn’t trust maintenance because they thought they were being blamed. I tried to find the truth.” Once he earned the trust of “the people on the floor,” they became long term, “true friends.”

Throughout his years there, Roy worked mostly first shift. He met his wife at Winchester, although “she didn’t make the first month... She got sick. They said she had missed two days without calling... She [really] got fired because she was a distraction [because of her looks] but they didn’t say that.”

He lived in Fair Haven when first working at Winchester, usually driving to work. Then, when he and his wife moved to West Haven, he took the bus so she could use their car to get to medical appointments.

Serious Health and Safety issues
“When I first started there, safety [equipment] was a privilege.”

Vapors: “There were people in some situations working with vapors [using] a ratty fan that didn’t work well. They gave them masks, but they were dust masks, not vapor masks... It was just for show. I told them that.”

Electronic Issues: In one case, machines were removed from a room, but the wires were left behind, wrapped up in tape, the power not shut off. The tape came loose and a worker was shocked.

“I got electrocuted twice” while working at Winchester, and had to go to the company doctor in North Haven. He was “not a bedside manner kind of guy. He told me, ‘the pain will either go by fast or slow...’”

Old, substandard equipment: Winchester had an on-site nurse “for small things. She was good. She pulled a lot of splinters out of me. We had some old equipment,” including old rickety ladders. Much of their equipment was “always operating...just barely.”

Indifference: Management was “indifferent to safety conditions... mostly their attitude was that money could be spent better somewhere else.” The bosses felt that “maintenance people caused problems.” One manager “felt that whatever money he didn’t spend on safety equipment went into his pocket.”

OSHA was called in. The company had suspicions as to who called OSHA and the man was let go, but the OSHA personnel were there for weeks. “It was like a training center for them.”

“We got no support for quality except for quality parts...not quality of life...OSHA had a field day at that place (the old plant.) When we built the new plant,” however, “we never saw them.”

The one agency that did show up was “water safety.” Winchester had been built on a swamp, and when they were cleaning up for the new building, workers dug up old oil tanks that had been forgotten. New condos had been built in the area, but they “couldn’t open them up because oil was pouring into the water system.”

Outside contractors: “Management really didn’t check what outsider contractors did. They were profiting from the contractors...” One contractor told one boss he’d do a $4000 job for $2000, and “he could expect an envelope when the job was done.

“My boss explained to me that you should not tell anyone this.”

“One time I was told to disconnect a machine...I went toward a compressor and it went off. [There was] no box to turn off [the] power. The only way to turn it off was to go to another building on another block. [There was] no sign saying ‘high voltage’ or ‘danger.’ I said, ‘You paid these people tens of 1000s of dollars and didn’t even look to see if the switch was there!’

Roy and the Union

Did the union intervene in health and safety issues? “That was spotty, especially in the old factory...The union did not get involved as much as they should have.”

Roy became active in the union “only in the last few years before we closed.”

“The first three contracts I had, we got no raises, for nine years.” The next time, everyone in maintenance began picking up their tools and leaving. “We got a raise that year, a good raise.”

The last union president that Roy liked and respected was Craig Gauthier. “He was the last one who really fought the company and that I had confidence in...[The] union stopped being a place of hope at the same time I was being drawn towards it out of desperation.”

“I ended up cleaning bathrooms just to keep busy. I cleaned the hell out of them, too.”

The Herstal Group, based in Belgium, a “multinational group which owns Fabrique National, an arms manufacturer, and Browning Rifles,” bought the company. “When I first started Winchester made almost everything themselves except for castings.” Now, parts were made all over the world, although often identified as “American made.”

Two or three years before the company closed, Roy and other workers noticed that equipment was being moved. Returning to work after Christmas the last year, “I ran into one of the janitors who said, ‘They moved all the machines out.’ This was done during the [Christmas] break. Neighbors saw the trucks come in, but never saw them leave. I don’t really know why.

“Later on that week they made the official announcement...The plans had been kept secret. The people who did know what was going on were already busy stuffing their pockets with company money and [had] kept their mouths shut...”

Most of the workers were gone in March of 2006, with about a dozen or so left in the offices and a dozen in maintenance.

A larger-than-life statue of the actor John Wayne had greeted visitors at the main entrance of the plant for decades. On the last day before the final closing, in June 2006, “we all gathered around the statue... I had polished him up real good before that. I was the only one who cleaned up John Wayne.”

In a way, the final closing was a relief, because “the last few months with no one walking around were really sad. I ended up cleaning bathrooms just to keep busy. I cleaned the hell out of them, too. They were really clean.”

His life in the aftermath

After the closing, his wife was still sick, and “I was hurt...I just wanted to spend some time with her...” But he needed work. Under the Trade Adjustment program, he went to school, graduated and kept looking for a job. “Half the jobs I went to, they’d already laid off 12 people.”

As of this interview in 2010, he remained unemployed.

Why did he agree to do this interview with the Greater New Haven Labor History Association?
“I like history. I appreciate people who take care of history. It’s a good calling.”