“We were excited because we believed that Winchester could diversify… It was a plan to increase production and maintain quality… We had big plans to keep the plant here.” 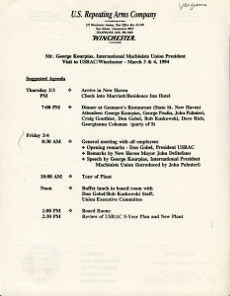 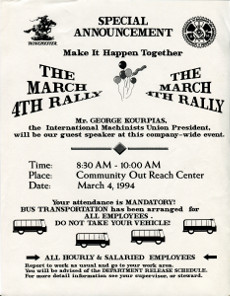 In the 1990s, the International Association of Machinists moved forward with its High Performance Work Organization to “define a new work system which draws on the insights and talents of front-line workers and [determine] how they will play a key role at the workplace.” THE IAM provided training for union leaders and asked them to negotiate HPWO agreements in their shops. The agreement was to include the following elements:

How did this play out at Winchester?

At the beginning of March, 1995, International Association of Machinists Union President George Kourpias visited the Winchester plant for a two day kick-off event which included a general meeting of all USRAC employees; conferences among union leaders, USRAC management and New Haven’s Mayor, John DeStefano; and a mandatory rally.

HPWO language had already been written into the union contract, and Local 609 leaders such as Craig Gauthier and Dave White were hopeful. Gauthier remembers, “We were excited because we believed that Winchester could diversify. It was a plan…to increase production and maintain quality…[For example], in the Assembly Shop we decided to ask the workers how to improve production. [Within] three weeks they had redesigned the whole Assembly Shop. Their production went from 300 guns to 600 guns a day.

“We went after [the HPWO] whole hog. Not only would it keep the company here, but it would allow us to diversify…and maintain a highly skilled, educated work force.”

Predictably, there was management resistance, “because they felt we were taking power away.” As the decade progressed and the new century began, the contract language wasn’t upheld and the effort flagged.